The 2020 drum corps season would have started this past weekend, but the cancellation of the season due to COVID-19 has left us with a large hole in our hearts. Since I have been writing reviews for Drum Corps World throughout the past two decades, I thought it would be fun to pull some of them out of my archives and share them with you. Were you at any of these shows, either as a fan, a member, or part of a corps staff or volunteer team?

Today’s look back takes us to 2011 and the first time DCI featured a show in movie cinemas to start the season. The “Tour Premiere”, as it was and still is named, had a very different format than what we see now. Read on for my impression of the show from that night in the theater. 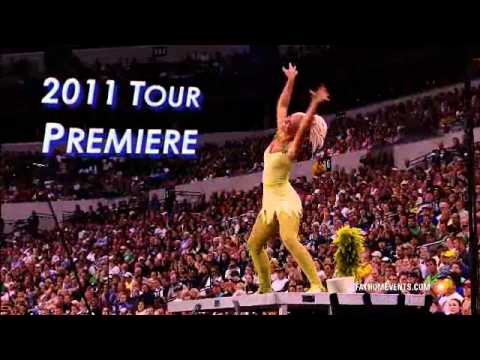 Monday, June 20th presented many firsts for Drum Corps International and the drum corps activity in general. For the first time since 2008, the Blue Devils were not announced in first place. In fact, for the first time in who knows how long, the Blue Devils led off the show lineup, stepping off while the sun was still visible. For the first time since 1988 DCI Championships in Kansas City, scores were not announced at the show, held until the end of the cinecast when the first two shows’ scores were presented to viewers. On top of all that, for the first time, DCI presented the previous year’s top 8 corps in a head-to-head showdown recorded live for fans across the country to experience in movie theaters. The new show format, while not officially part of the Tour of Champions series, also a first in the activity, was still unique as it was the first time such a meeting of top corps had occurred at the beginning of the season.

DCI Field Pass host and show announcer Dan Potter reported on the Wednesday, June 22nd edition of the podcast that the movie theater he attended in Tulsa, OK, had about three quarters attendance, while show attendees reported in the Drum Corps Planet discussion forums varying levels of attendance. There were also six theaters which cancelled showing the cinecast as ticket sales were not high enough to justify running the show. Dan Potter also informed his Field Pass listeners the day of the show was that Tom Blair and his production team uploaded the show as it was happening, with no opportunity to process or edit the multimedia package which appeared on over 400 theater screens just 24 hours after the show started. Since the cinecast was essentially live and, being the beginning of the season, the production team was not as familiar with the shows as they would be at Quarterfinals, there were a few issues, but they were few and, outside of a five minute loss of sound and thirty second loss of video coming out of the break which did not affect any corps performances, Mr. Blair can definitely count this cinecast as a success.

One bonus of watching the shows on the big screen was the addition of designer commentary before each corps performed. Each corps had a member of the admin or design staff visit the press box and talk with hosts Steve Rondinaro and Dennis DeLucia about what the audience was about to see. As this was a first read of these shows for many of the audience members across the country, the commentaries, even if only for a few minutes, gave great insight into the 2011 productions which were about to be presented. After all the corps performed, Steve and Dennis were joined by the new Artistic Director of Drum Corps International, Michael Cesario. Michael talked about the shows which everybody had just witnessed, but also took the time to answer questions about the potential entertainment caption currently under discussion. This proposal, as well as Cesario’s new position, are both intended to address the issue of entertainment in the junior corps activity, and it will be interesting to see his influence on DCI and the member corps, both now and in the future.

The corps themselves, from the members to the instructional staff to the design team, deserve high praise for the level of preparation they showed coming into the start of the season. The Cavaliers were the only corps who did not have a complete package, standing still for the last two minutes as they still had drill and guard work to finish. While this is normally an issue for the paying fan, considering that the Cavies have already learned over 200 pages of drill and, when the full show is on the field, will march a whopping 270+ total drill pages, throw in the incredibly damp Midwest spring and it’s understandable that the boys from Rosemont would need a little extra time to finish putting their show together. On the other hand, the Cadets, who, according to corps director George Hopkins, had a shorter spring training than in years past, were only missing their shakos. This was on purpose, however, as the high winds which plagued color guards throughout the night and the weekend made it too easy for headgear to go flying not just to the ground, but also at other corps members, creating a hazard exacerbated by the speed of the Cadets’ drill this year.

The Blue Devils, Blue Stars, and Carolina Crown were corps who were not worried about the wind. While BD’s show theme is “The Beat My Heart Skipped”, the corps used inspiration from the title and lyrics of one of their show’s songs, “A House Is Not a Home”, fashioning three dimensional props which, on their own, looked like boxes, planks, and stars but, at the start of the show’s closer, all of the props came together to form a house (boxes), complete with flowers (stars) lining a sidewalk (planks). The corps then made their way into the “house” before reappearing from the “back yard” to reprise the opener in a final park and blow. The Blue Stars, meanwhile, took their show to a new level…literally. Utilizing ramps and scaffolding to create a cityscape effect, which will become more pronounced when city images are added to the front of the setup, the Blue Stars’ members took turns throughout the show heading up the ramps and onto the scaffolding to perform. Considering the possibility of a strong gust of wind causing a corps member to lose their balance, it had to be an interesting experience for those who had to perform on this setup. Carolina Crown also utilized props in the form of scaffold posts similar to what you’d find as part of a stadium rock concert stage, fitting considering their theme of “Rach Star”.

The three remaining corps of the night all focused on what they do best. The Bluecoats, coming off of their best competitive season ever, continued their modern take on the drum corps activity with “Brave New World”, becoming the first corps to perform Radiohead in competition. Phantom Regiment combined their history of performing classical music with their recent penchant for storytelling on the field with “Juliet”, telling the classic Shakespearean tale of Romeo & Juliet from her perspective. Santa Clara Vanguard once again is living up to their name, performing a show, “The Devil’s Staircase”, in which all of the musical selections and some of the composers have not been heard on the drum corps field before. SCV CEO Jeff Fiedler summed up this show very simply, stating “You’re in Hell. How do you escape?”. One thing is for sure: 2011 drum corps fans will definitely NOT be in Hell watching any of these shows.